Have recent floods in the UK increased the spread of Japanese Knotweed?

The recent flooding in the UK has caused widespread disruption to people and businesses. Of course, in these events, the top priority is to protect people and property. However, an often under appreciated impact resulting from flooding is the spread of Japanese knotweed. 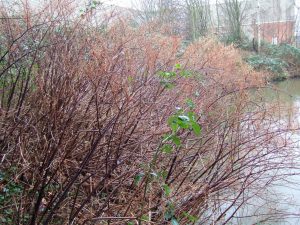 Look at the NBN Atlas for UK records of Japanese Knotweed

With flooding events becoming more severe and frequent due to the effects of climate change, are we set to see an increase in new cases of Japanese knotweed in areas previously unaffected when spring arrives?

Why floods encourage the spread of Japanese Knotweed

Within the UK, Japanese knotweed does not spread by seed, but by fragments of the plant’s underground root system – known as rhizomes. In many cases it is human activity that is responsible, and it is clear to see why, considering that a small fragment weighing as little as 0.7g can be enough for a new plant to grow, which makes such propagules extremely easy to spread. Couple this with the fact that, once established, Japanese knotweed removal can be a difficult process, and it becomes clear why this species’ invasiveness is so infamous.

Japanese knotweed can often be found along river banks due to eroded rhizome fragments being carried downstream by currents. When flooding occurs, this can happen on a much larger scale, and Japanese knotweed can be transported to new locations previously unreachable by the natural spread of the plant. 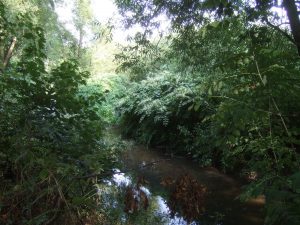 Knotweed rhizomes from plants which have been pulled up and fragmented due to the sheer force of rushing water can be amongst the debris often carried by flood waters. These fragments will end up settling somewhere downstream or in flooded areas as the waters recede, and if not dealt with, could lead to new areas of knotweed growth, which in just a few years may grow to be 2-3 metres tall.

Which regions of the UK are the most affected?

Areas most affected by flooding tend to be low lying areas, and areas in the vicinity of rivers and other water bodies. With knotweed being widespread across the UK, there is a risk of rhizomes ‘washing up’ in a property, regardless of its proximity to any water bodies, as surface water flooding can also lead to the transportation of knotweed rhizomes.

What solutions are being implemented?

Not only can new Japanese knotweed infestations be caused by flooding, but the presence of this invasive species along river banks can actually exacerbate flooding due to increased bank erosion. This is because Japanese knotweed rhizomes are less stabilising, as well as being more easily fragmented, than the woody roots of native trees and shrubs, and so river banks infested with knotweed can be more easily eroded. Also, due to the plant’s aboveground stems and leaves dying back during the winter, banks can be exposed at these times, which can often coincide with periods of higher rainfall, leaving banks exposed to increased water levels and higher run off.

To date, the focus of research on flooding and on the provision of flooding solutions has been prioritised on the financial and health effects. There has been relatively little focus on the assessment or mitigation of the spreading of invasive non-native species, like Japanese knotweed, caused by flooding. There is currently not much that can be done to prevent Japanese knotweed from ending up on your property following a flooding event, other than ensuring that flood defences are well maintained to keep the flood waters out.

There are, however, a few things that can be done once the flood waters have receded, such as immediately surveying the area to check for rhizomes amongst any debris that might have been deposited by the flood waters. Longer term, it is advisable to monitor any affected areas for new Japanese knotweed growth, especially in the growing period of March to October. For more information on how to identify Japanese knotweed please browse our website or feel free to contact us and we will be happy to help.