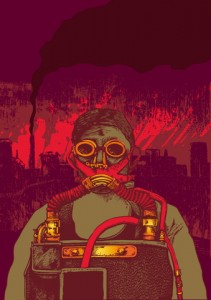 As air quality consultants we know air pollution is nothing new. The Romans complained bitterly about the polluted air in their cities, a horrid combination of wood smoke and untreated sewage. And in pre-Bazalgette London the stink of human waste dumped in the Thames became so bad that the government had to temporarily abandon the Houses of Parliament (lime-soaked curtains were also installed in windows facing the Thames). However, probably the most famous historic text is Fumifugium, or, to give it its full title: ‘The Inconveniencie of the Aer and Smoak of London Dissipated Together with Some Remedies Humbly Proposed by J.E. Esq. to his Sacred Majestie, and to the Parliament now Assembled’, which was published in 1661 by John Evelyn. This is one of the earliest texts ever written on the subject of air pollution.
Bringing things up to date, the latest report from the World Health Organisation reveals seven million people died from air pollution in 2012. And the American Lung Association* reports that while the air over there is slowly getting cleaner, more than 50% of the US population still breathe air “dirty enough to cause health problems”.
The problem hasn’t gone away. Quite the contrary. So how is air pollution defined in a contemporary context, and what are the powers that be doing about it?
Classifying air pollution
Primary pollutants are those that are emitted directly to the air from human and natural sources. Secondary pollutants are created by chemical reactions between them and each other; things like low-level ozone and city smog. Even clean air contains all sorts of natural pollutants like dust, fine salt particles, harmful gases, pollen, ash and smoke from wildfires.
Air pollution affects people indoors, too. Sometimes the air indoors is much worse than outdoors, tainted with things like compounds leaking from new carpets and furnishings, fumes from paint, dust from building materials and volatile compounds from cooking. Because modern buildings have to comply with strict insulation guidelines, professional assessment of air quality and good indoor ventilation are piping hot topics.
So far there are more natural pollutants around than man-made ones, and we’ve evolved to cope very well with most of them. But as climate change rumbles on, effective air pollution solutions are more important than ever. It’s no surprise our air quality assessment services are in demand.
What is the UK air quality strategy?
Britain’s Air Quality Strategy drives the nation’s air quality standards. Pollution concentrations are measured over time, identifying acceptable levels based on what is known about the effects of each substance on our health and the environment. The standards act as a benchmark to help identify improvements and worsening air pollution levels.

With so many regulations to follow and standards to meet from different official bodies, you need professional air quality consultants on the case, to produce an air quality assessment that conforms with all the requirements. That’s where we come in, whether you’re building a factory and need predictive dispersion modelling assessments or are simply building a single dwelling.