The Positive Side of Japanese Knotweed, Britain's Most Hated Invader 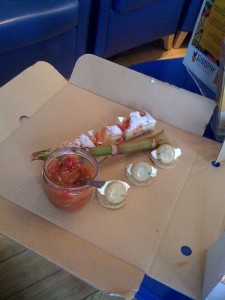 Everyone hates Japanese knotweed. The invader is widely feared and reviled, responsible for ruining home purchases, destroying infrastructure, driving legal action, making life impossible for local wildlife and sticking around in the soil for so long it seems more or less invincible. Japanese knotweed control is big business. But playing devil’s advocate, is there a positive side to the plant everyone loves to hate? Some people think so.

According to New Scientist reader Ruth Burroughs, the dreaded weed isn’t all bad. Here’s what she said in the magazine’s 5th July 2014 edition:

“I was concerned to read the diatribe against Japanese knotweed. While not wishing to defend some of knotweed’s thuggish habits, your article was in my view both biased and unscientific.
To describe it as having the “biodiversity value of concrete” is absurd. It is in fact a valuable nectar source for many insects, including honey bees. Its phytochemistry is complex and fascinating and beyond the scope of this letter, but suffice it to say it has broad antibacterial, antifungal and antiviral activity as well as being a rich source of resveratrol, a compound claimed to have many health benefits. The plant has a long history of use in Japan as a medicine and a food source.”

“According to Whole Foods Magazine Online, Japanese knotweed contains significant concentrations of the potent antioxidant resveratrol. Resveratrol occurs naturally in many foods such as grapes, peanuts, mulberries and red wine. Consumption of Japanese knotweed promotes several beneficial health effects due to the presence of resveratrol.”

They go on to say that the amount of resveratrol in the plant is also thought to have a preventative effect on Alzheimer’s disease, according to a study by the Feinstein Institute of Medical Research in Manhasset, New York. While they’ve only noted the effect so far in cultured cells and animal studies, there are hopes the substance might also help prevent the disease in humans.
Research appears to suggest that resveratrol helps mitigate some forms of cardiovascular diseases and even some cancers. But, being realistic, the jury is still out. One thing is certain, the invader is rich in vitamin A, vitamin C, potassium, phosphorus, zinc and manganese.

Can I eat Japanese knotweed?

Apparently so, and it tastes wonderful especially in recipes that demand a sour ingredient. In Japan, villages even hold annual knotweed festivals where numerous delicious recipes are showcased. But there’s more. It also contains a natural pesticide called MOI-106, which means it could eventually prove useful for organic farmers.
According to Wild Man Steve Brill:

“Best when 6 to 8 inches tall, the intensely tart, tangy shoots (discard all the tough leaves) taste like rhubarb, only better. A tough rind that you must peel (good for making marmalade) covers the taller ones.
Slice the stems, steam as a vegetable, and simmer in soups, sauces, fruit compotes, and jam, or bake in dessert dishes. Use sparingly. I’ve made terrific apple sauce and excellent strawberry compotes using just 1 part knotweed to 10 parts fruit.
You may even substitute cooked knotweed, which gets very soft, for lemon juice, transforming familiar recipes into exotic ones. Or use a chopstick to pierce the membranes that separate the segments of 1-foot-tall shoots, peel, stuff the stalks with sweet or savory stuffing, and bake in an appropriate sauce.”

If you’d like to check out some tasty Japanese knotweed recipes, try Fergus the Forager’s excellent website or our very own Japanese knotweed crumble recipe. But if you don’t care about its nutritional benefits and just want to get rid of the stuff before it trashes your home, garden, driveway or premises, call us in and we’ll deal with it quickly, efficiently and professionally, with our proven, highly effective Japanese knotweed eradication measures.