Have we really seen a rise in Giant Hogweed in the UK? 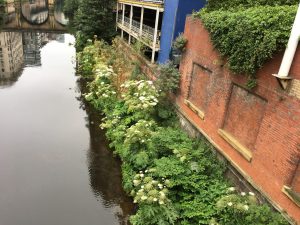 Dubbed by some as Britain’s most dangerous plant, Giant Hogweed (Heracleum mantegazzianum) was thrust further into the limelight in 2019 due to dramatic stories hitting the headlines in a number of UK newspapers. Indeed, Invasive Non-native species (INNS) were highlighted by The Environmental Audit Committee in October 2019 with tabloids pointing towards their particular concern for Giant Hogweed. The committee deems INNS as one of the UK’s top five threats to the natural environment, and the report calls on the government to train a biosecurity citizens army of 1.3 million volunteers to tackle invasive species outbreaks. Many of the stories are clearly sensationalized, but is there any truth to some of the warnings?

Giant Hogweed is considered a human health hazard, due to the sap containing compounds which upon contact with the skin, cause blisters and potentially long-term photosensitivity. The result can be recurring nasty blisters which flare up whenever exposed to sunlight.

Where does it originate from?

Much like its bedfellow, Japanese knotweed, it was brought to the UK towards the end of the 19th century as an ornamental plant. Giant Hogweed specifically originates from the Caucasus mountains and Asia. Although there is a Hogweed species native to the UK, Common Hogweed (Heracelum sphondylium – also known as cow parsnip) is a much smaller plant than its invasive cousin.

What is encouraging its growth?

Reproductively, Giant Hogweed is quite different to knotweed. Knotweed in the UK only spreads via vegetative means, while, contrastingly, Giant Hogweed spreads only by seed. This explains why Giant Hogweed is commonly found along river banks as the flowing water provides an effective means of transporting seeds across large ranges. Other typical Giant Hogweed stomping grounds include road verges, railway banks and wasteland. 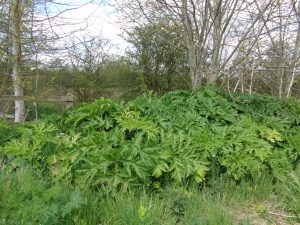 With changing weather patterns affecting the UK, it is possible that there will be an increased risk of flooding in some areas. When flooding does occur, Giant Hogweed seeds may spread even further than their typical range. One report suggests that the seeds can remain buoyant for three days. As well as the potential increased risk of flooding, another side effect of climate change is the potential for longer and hotter UK summers, which could provide Giant Hogweed with conditions more favourable for its proliferation.

Though nigh on impossible to stop all infestations of Giant Hogweed, it is possible to reduce its spread and therefore significantly reduce the threat posed by it. This is most effectively done by staying vigilant, taking time to learn a little about what the plant looks like and where it is likely to be found. The earlier the plant is spotted the quicker it can be dealt with, therefore limiting the chance of a large-scale outbreak. The plant looks slightly different throughout each season, therefore it is helpful to know what the plant looks like during its different growth stages. During Spring the plant begins to grow and has large, spiky, basal leaves fairly low to the ground. This is the ideal time to implement effective control, such as herbicide treatment or excavation and appropriate disposal of soils containing plants and seeds. During summer, large stems can be seen with large umbrella-like flower heads. During summer the plant is at its most dangerous with the toxic sap being present in the tall stems. The plant can still be treated at this stage; however, there is a risk that the seeds have developed and therefore could potentially be dispersed and be able to grow into new plants the following year. If treating the plant using herbicide during this stage, ensure that you are as covered up as possible, including the wearing of overalls, face masks and long gloves. The plant dies back in the winter leaving in place brittle dead stems and skeletal seed heads. If you need any further advice, then please contact us. We’d be very happy to get involved in any projects where Giant Hogweed needs to be controlled.