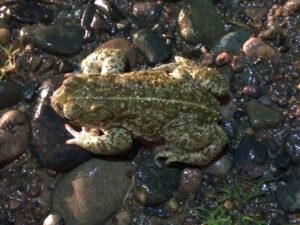 Great crested newt, pool frog and natterjack toad are the only British amphibians that are designated European Protected Species (EPS). Pool frog and natterjack toad are reasonably rare and are unlikely to be found on most development sites. However, developers need to be aware of the potential for great crested newt to be present on their land and the implications this might have for development.

There are three native newt species in the UK. Great crested newt, smooth newt, and palmate newt. Compared to the other newt species, adult great crested newts are significantly larger, have an orange strip on their toes, and can have a blotched orange belly. The male also has a tall crest along its back and a separate crest on its tail.

The survey season for great crested newt focuses on their breeding period when they return to their ponds. They live most of their life on land, amongst rough grassland, hedgerows and woodlands.

Great crested newts are nocturnal and tend to emerge from hibernation when temperatures have risen above 5 °C. This can be from February to May. 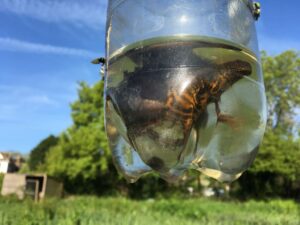 Great crested newts can be surveyed from May to June (depending on the technique used), although the peak month is from mid April to mid May.

You need a license to handle great crested newts. If they are found on a site then a European Protected Species Mitigation (EPSM) license will be required.

In parts of the UK there is an alternative to traditional surveying and waiting for the peak month to survey. This is District Level Licensing. The aim of this approach is to offset the impacts of development projects at regional level by virtue of a payment system. The developers pays an agreed sum for local conservation measures for great created newts and then does not have to carry out site mitigation (e.g. fencing trapping, and monitoring).

The advantages of the District Level License:

The disadvantages of the District Level License:

Where the District Level License is available:

Currently through Natural England the scheme is available at:

Through Nature Space the scheme is available at:

The team at Phlorum is able to advise on great crested newt issues and liaise with planning authorities where necessary. We have experienced surveyors who are licensed to undertake presence/absence and population assessment surveys for great crested newts and, in addition, we are able to compile and offer European Protected Species Mitigation (EPSM) licence applications.

Contact us today for free advice if you are concerned about an ecological issue that might require further investigation. We are happy to have a no obligation chat to see how we can help.

Clients we worked with