What is Giant Hogweed?

Giant Hogweed (Heracleum mantegazzianum) is a non-native invasive plant species that can grow abundantly along a range of habitat types, notably the banks of rivers and streams and some road corridors. Taxonomically, it is a member of the family Apiaceae (carrots/umbellifers), and is native to the Caucasus and Central Asia. Giant Hogweed is biennial to perennial with tuberous rootstalks which form perennating buds each year. It can take four years before a plant produces a flower stalk, with flower heads appearing from late spring to mid-summer. 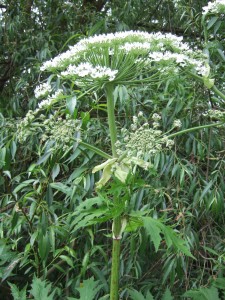 Giant hogweed is a human health hazard and exerts a negative ecological impact on locations where it thrives, which are mainly along the banks of rivers and other watercourses. The plants contain substances called furanocoumarins within their sap, which, on contact with skin causes it to become sensitive to sunlight. This can result in severe burns to affected areas, producing painful swelling and blistering.

The symptoms are the same for animals as they are for humans and include severe red dashes, boils, blistering and red to dark purple skin discolourations. These symptoms can last for several months and in some cases may persist for 5 years or more due to reactivation by exposure to sunlight.

The invasive nature of giant hogweed plants often results in them growing at the expense of many native species, reducing suitable habitat for other plants and hence reducing the availability of food and shelter for associated insects, birds and mammals.

It is widespread and common across the UK, often found along river banks as well as in road verges and railway banks.

Each giant hogweed plant can produce up to 50,000 seeds per flower head, which appear in late summer. These seeds can remain dormant in the soil for several years – anecdotally as much as ten years. The movement of soil containing giant hogweed seeds must be carefully controlled to prevent the spread of the plant. UK environmental agencies consider soil containing seeds to be controlled waste and must be handled and disposed of in accordance with the appropriate legal duty of care. It is a criminal offence to plant or to cause giant hogweed to spread in the wild.

The immediate removal solution often utilised on development sites is to dig out plants and clear the aboveground leaves and stems and then scrape up the soil that contains the seeds. Seeds are usually only present in the top 5cm or so of soil and as they are relatively large and heavy, they don’t tend to spread too far from the parent plants (e.g. maybe a few metres – unless in flowing water). However, it’s almost impossible to guarantee that all seeds have been removed. Therefore, continued monitoring and herbicide application to new plants as they appear is recommended for several years following the initial treatment. This option is in many cases the most effective as it enables the immediate removal of the plants and seed bank, thus being the fastest way to achieve a site free of giant hogweed.

How to Get Rid of Giant Hogweed 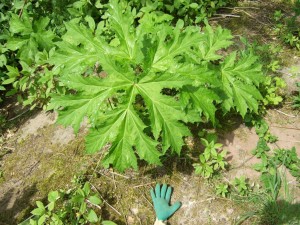 Spraying with an appropriate herbicide such as glyphosate can be particularly effective in controlling giant hogweed. However, this does not treat the underlying seed bank, which can remain viable for several years (perhaps as much as ten years). Therefore, repeat applications of herbicide will usually be required over this time until the seed bank is depleted. It is vitally important that herbicides are applied in early summer, before the plants produce seeds, otherwise the seed bank will be refreshed.

A particularly effective treatment strategy that avoids using herbicides and relies on the fact that plants die after setting seed is also available. Simply cutting off the flower heads before they seed will result in the plants dying before they can reproduce. If this is done successively until the seed bank is depleted, it will result in eradication. However, it can be labour intensive and requires long term commitment to the goal in hand. Such methods are employed by numerous authorities along many river catchments, where effective control is necessary to prevent the rapid spread of seeds downstream. Quite often, such treatment strategies rely on the long-term use of volunteer groups. However, the health and safety risks of working amongst giant hogweed and being exposed to the plant’s sap need to be effectively assessed and mitigated (e.g. use of appropriate coveralls, gloves and eye protection).

If located along a water course or roadway, it can be difficult to prevent giant hogweed from growing on your site. To help prevention, you can check that equipment arriving to site is clean. If you have giant hogweed on your site, make sure equipment and machinery is cleaned prior to leaving the giant hogweed affected areas to ensure that seeds aren’t spread across or off-site. Also, any imported soil should be free of propagules of any invasive species.

We can help solve your giant hogweed problem. We can be contracted directly to carry out the site works outlined above, or employed in a consultancy role to map areas of invasion and provide detailed management plans to seek to eradicate the problem.

Please contact us for more details on our services and to discuss your specific needs. We also provide services regarding Japanese knotweed removal and contaminated land.